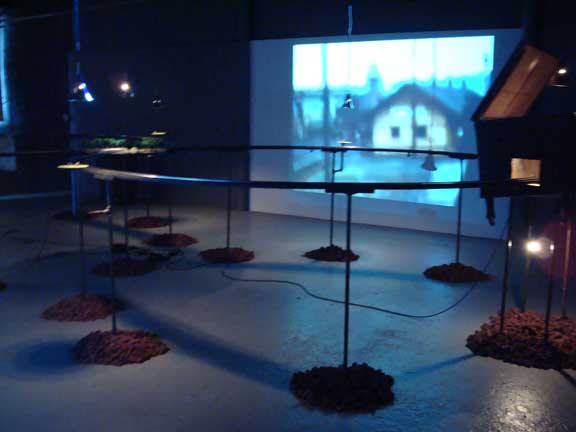 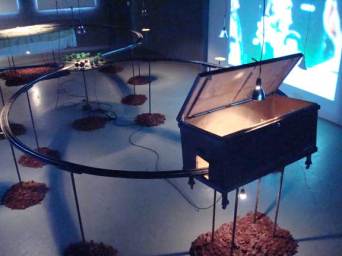 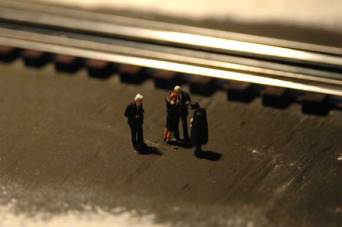 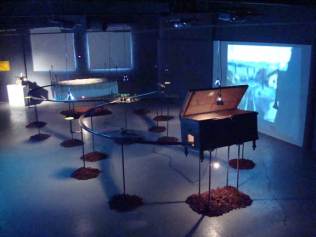 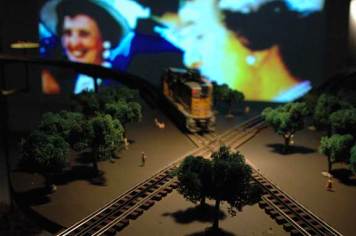 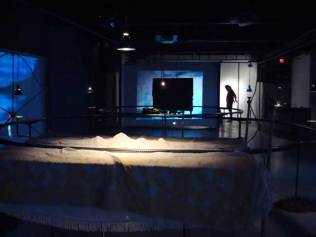 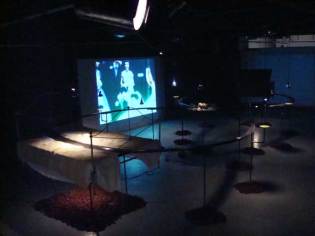 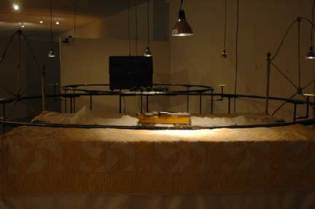 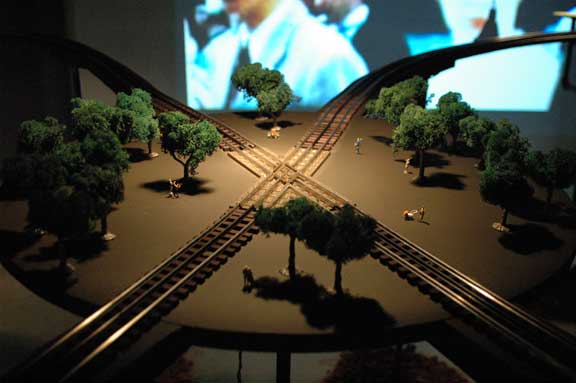 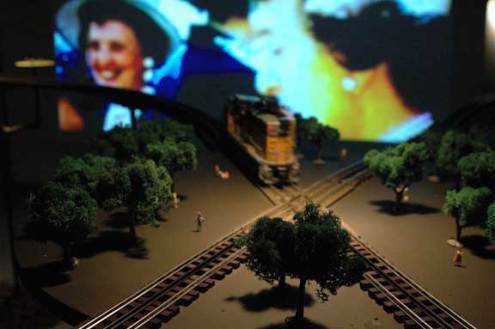 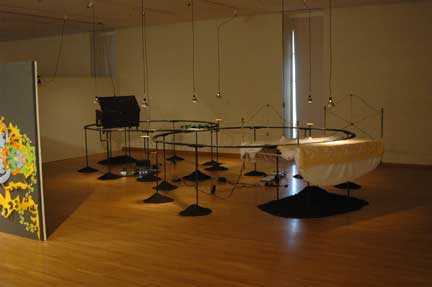 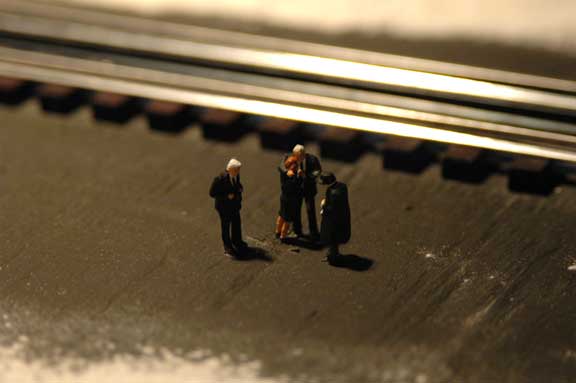 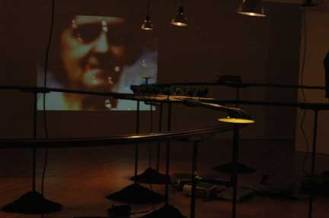 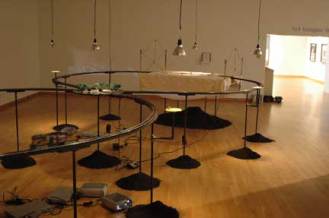 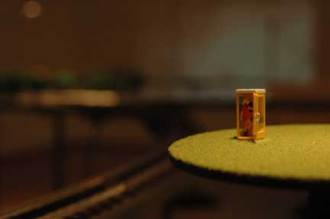 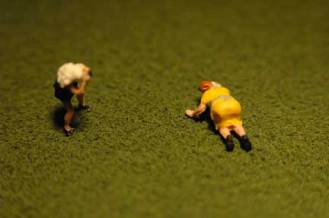 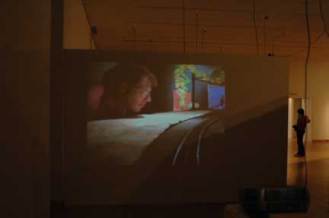 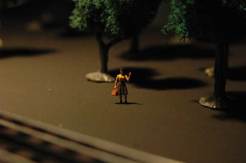 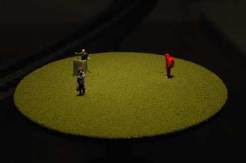 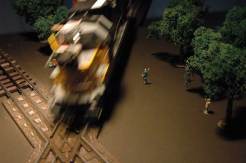 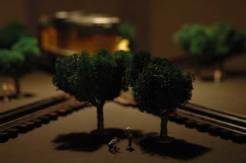 Paramnesia: An Installation by Jody Boyer and Russ Nordman

Paramnesia is a collaboration by interdisciplinary artists Jody Boyer and Russ Nordman. Like amnesia, paramnesia is a real medical condition, where the afflicted confuse reverie with reality and remain unable to distinguish between what exists and what is imagined. But unlike amnesia, people who experience paramnesia remember their experiences, conflating fact and fantasy until the two become immutably intertwined. This interactive installation induces paramnesia in viewers by taking them on a literal and figurative journey that is at once fanciful and drolly offbeat.

Using a model train mounted with a miniature video camera, Boyer and Nordman guide their audience through a fantastic landscape, where forests, figurines and furniture all serve as metaphorical backdrops. A real, i.e. “normal sized,” chair, antique iron bed and dresser are suspended from the ceiling at odd angles, reminiscent of the skewed illusions glimpsed in bad dreams and hazy hallucinations. The dimly-lighted installation space becomes the viewer’s own bedroom, the train taking him or her on a nocturnal excursion where tiny plastic figures add shadowy life to the train track’s terrain. Fleeting film footage culled from old home movies, their grainy images reminiscent of a bygone era and the nostalgia of simpler times, acts as the wider backdrop to this tableau. Most poignantly, a smiling little girl proudly makes her way down church steps in her First Holy Communion dress, followed by a young man carefully taking aim at a target with a bow and arrow. The two segments are wholly unrelated, but these discarded home movies suggest unremembered events and forgotten lives, relived and revivified by strangers, who construct them into their own memories. These video vignettes are timed with the eerie pulse of music that resembles the persistent chug of a train, but one somehow slowed in time, not quite traversing into the here and now. The intricately-staged setting, flickering footage and somber background noise all combine to form a unified, but nonetheless disjointed, visual and audio experience. But they serve as only the first part of the paramnesiac’s interaction with the installation.

In a separate room, viewers watch from a different vantage point as the train’s camera transmits live video feed from its circumnavigation around the track. The miniature figurines appear as real people, now normal size, while the spectators outside the video room become ephemeral silhouettes on the gloaming margins of the installation space. Watching the video footage from afar is both mesmerizing and surreal. The images captured by the camera emerge as immediately recognizable, but they are transformed into recreated memories, tempered by the viewer’s changed perspective. A woman holding a baby looms into sight, the lights of the train capturing her frozen and transfixed, lonely and vaguely desperate. The train simply passes her by, and the woman vanishes into the darkness. In stark contrast, an elderly couple sits in the dense branches of the forest, sweetly snuggling and oblivious to the train and its voyeuristic passengers. When the camera passes through a tunnel carved through the dresser, the landscape becomes brilliantly illuminated by bright, white light. We are suddenly in the full glare of the noonday sun, fluffy cotton seeming like gleaming snow. It’s an ocular punch, a visual wake-up call that jars spectators out of their sleepy reveries. What is real: the installation space outside or the world captured by the train’s camera? That is the philosophical question’Paramnesia poses, pushing viewers to reconcile the two worlds they have visited.

And while there is perhaps no definitive answer, Jody Boyer and Russ Nordman have created an artistic experiment that blurs memory and imagination and remains visually resonant with viewers long after they have left the train tracks behind. In this regard, Paramnesia is catching, and in a way that prompts insightful reflection about what is real and what is imagined – and if there is really any difference between the two.